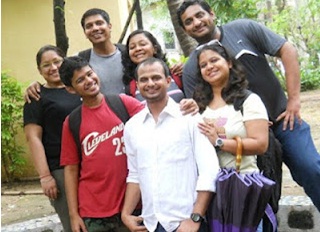 It had been a very long time since I met my ex team 'Phoenix', so I shot off an email to get everyone on board. A couple of mins later I got a flurry of replies.
I put that down to initial, uncommitted excitement. "Awesome", "Phoenix Rocks", "Count me in" and "Wouldn't miss it for the world" were some of the responses.

I was excited and got into planning this exciting event; Venue: RiverGate- Karjat, as the days went by the initial excitement settled down and reality set in.
"Sorry can't make it", "Just realized I have other plans", the awkward I'm not coming in spite of committing grin and other fantastic excuses, made our 16 strong phoenix team, look like a sparrow ninja (just coined that term). So now we were down to 10.

A couple of days later we decided to book RiverGate, party of 10. Luckily they were already booked, so we decided to go to Nandanvan; a place with good food, a private swimming pool and clean toilets/washrooms. So Liz our chief organizer made the arrangements.

Nandanvan it was, excitement was still simmering and most of us were anxious and looking forward to this reunion. A week later we had 1 more cancellation. Now were down to 9. Expenses revised, updates sent. Approximately 1300 per person. A week later another one bit the dust. We were now 8.

I did a quick revision of the picnic cost and sent an update. Samuel sent teasers, trying to uplift the waning fervor.

8th and 9th of July was the D-day, all my bags were packed and I was ready to leave. “Nandanvan here we come” echoed in our hearts.

I was doing an early morning shift and in my excitement in left my wallet at home (ID, License, and Money)

We had collected money earlier so it didn’t really matter, at first. So we had a team huddle and decided how we were going to go. When we got another suicidal sparrow flame out, it looked more like phoenix was turning into ashes. So now we were the super 7.

Now, the price just went up per head and it was too expensive to go to a place that was half way across the world, and required ‘Me’ to travel by public transport, it was just not going to happen.

So Liz, our dear Liz was on the phone again, finally we called this place called Dominica’s.
It was 2pm and we were scheduled to leave at 4pm. Liz seemed absolutely baffled when she called up as they told her we needed to adhere to 2 very important rules. 1# No loud Music – understandable and 2# No Hookers - ???

Who did they think we were, and why would 4 guys and 3 girls take Hookers for a picnic???
Well after checking with the rest we all in agreement that we would have to skip the hookers this time.

Now that we were downsized to 7, like the global economy in 2008, I decided that I had to get my wallet, if I was going to drive all the way. So Liz and I headed to my place. We reached my place and were back in a jiffy (5:15pm) just an hour and 15mins behind schedule.

Tanya, Adrian, and Sam took the ferry and reached the place. Liz, Shiv, Tina and I drove to Manori, we reached at 8 after picking up the alcohol.

Finally Phoenix reunited, we had 7 important people, and the rest didn’t matter that that time.
The food at Dominica's was pretty good.  We talked for a bit and then started playing ‘Taboo’ and then ‘Monopoly’.

At 1am, Tanya was tired so she decided to take a quick cat nap; I guess she was referring to the cat that swallowed a whole box of sleeping pills. Her cat nap lasted 9hours.

By 2am, most of us were operating on standby mode; one by one we all took our own cat naps.
10am, most of the cats were still sleeping, so we woke them up, ordered breakfast and started a another game of ‘Monopoly’

I don’t want brag, but since it was a dream run, I thought I’d let you know how the game ended. Well to say the least, I owned everything, I mean everything, and one by one I picked them off, putting them out of their misery and on to the street, well figuratively.

After a quick lunch we packed our bags and a couple of snaps later we headed back home.

Overall it was a nice spontaneous picnic with some great company…
Looking forward to more outings with my ex team, let me correct myself my team, they will never be an ‘Ex’ cause they are always there!