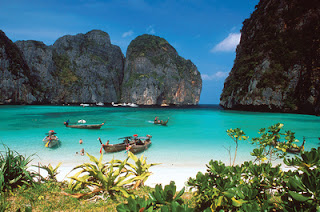 My trip to Bangkok was packed with a lot of "life lessons", I am glad I learnt from it. =)

My flight was smooth; there were only 30 of us on the plane, so after take-off we could sit anywhere. I arrived in Bangkok Suvarnabhumi Airport at 6:30am. I then started to walk to Visa control.

I filled in my application, and was about to submit my Visa, the guy asked me how much of money I had; I told him that I had USD 200 and a credit card. He said "NOT ENOUGH, you need minimum USD 300, or TBH10000.

I had about 15K in Indian currency, but INR is as good as toilet paper. I did not have any more money, so I tried to withdraw TBH 5000 from my credit cards, however for some reason it did not work. (I later found out that ICICI systems were down that day) I was in a fix; my tour operator had not told me that you need a certain amount of cash with you.

I walked around the airport for about 2.5 hours, trying every ATM, and Exchange point to see if any of my other cards would work, but no luck.

I finally went back to the Visa control area and I sat down, I was trying to figure out a way to make it out of the airport. Then I saw 2 Indians walking. I approached them and I explained the situation to them, I told them that I needed TBH 4000 for 10 mins, and I would return the money to them as soon as I got my Visa.

They had arrived from the UAE and they too did not have any money with them, however one of them withdrew TBH 24000 (bhat) from his credit card and he gave me TBH 4000. I got my Visa processed and after immigration check, I gave him his money and I also gave him TBH 200 for his help.

I finally got out of the airport at 10am, I went to the meeting point and No one was there, I met another tour operator and asked them to call my tour operator, (I did not have my international roaming activated, so I could not make or receive any calls)

Finally this lady said that she would take care of everything and guided me to the bus. I sat down in the bus and was relieved that this episode was finally over, so I decided to click a snap of the airport and ...My camera was not there.

OH NO, I had left it a Visa Control, in all that commotion, (to get a visa you need a snap, and I placed my camera down at the photo booth)

I rushed back through the airport, though security, customs and I was out of breath, I told them I had left my camera, they asked me to describe my camera and I GOT IT BACK!!!! WHEW!

I then rushed back to the bus, my legs were aching as I had run all the way, and I finally got into the bus. And the clicked a snap of myself to remind me of this experience (see Pic)

Then after a 4 hour ride, I reached Pattaya, I checked in and had a bath :) and when off to sleep, after 2 hours around 3pm, I went to KFC for lunch.

In Pattaya and Bangkok, they mostly have sea food, and stuff I can't even pronounce :) So I stuck to things I was aware of.

I did not find anything interesting, then I went to Starbucks and then I went back to my hotel, after another bath, I went off to sleep.

In the evening I went to Burger King, and NO, I did not have a burger there, I had the same thing, 1 coke, Fries, and chicken :)

Then I took a walk by the sea and then after a few snaps of the area and of myself, I headed back to the hotel. I had another bath and I went off to sleep.

As you will notice, in the snaps and through my narration of my trip, I had A LOT OF TIME on my hands :)

I clicked every possible angle of my room and I rearranged the mini bar so that everything would be in order. :)

OK, so where did I stop...ah yes, the next day I went down for breakfast, it was supposed to be a buffet, so I was happy as the buffet I had back home were excellent with a wide variety.

So I gave the bus boy/ waiter my coupon, and I sure did see a lot of variety, but none that I liked, they had rice, noodles for breakfast??? And eggs that still seemed to have some life in them, there were few other dishes which seem so fresh it was almost alive. They can surely claim that the food is fresh, and you can see it :)

So I settled for toast and tasteless butter, and a glass of Juice (some juice) it was purple and was sweet, I have no idea what I had :) After a scrumptious breakfast (I'm being sarcastic) :)

I waited and it was 10:30, no phone call or pick up, I checked with them again, that same very confident receptionist was as confused as a toddler in a university. Her expression stated that I had asked her the explanation of E = Mc2, I waited in the reception till 1pm and then I went back to my room, after another Bath, I went back to the shopping mall, I picked up some key chains and souvenirs for my team and after a lot of browsing and a quick bite at MC Donald, I went back to my hotel.

I spent the next day at the shopping mall, just sightseeing as I had not carried enough cash and I did not want to exhaust my credit card, in fear of being stranded, so one more day in Pattaya, doing absolutely nothing. In fact the only difference doing nothing at home and doing nothing in a foreign country it that it cost a whole lot more.

The only English Channel on TV was HBO, so I watched movies I would have never ever watched. I also tuned into the Thai news channel. You can imagine how desperate I was for entertainment.

The next day I was supposed to leave for Bangkok, from Pattaya, I was pleasantly surprised that my tour operator had left a message for me telling me that I would get a pick up at 11am.

So the next day I did not bother to go and have the exquisite breakfast :) I decided to go to KFC and then to Starbucks. I got up at 6am; I had a Bath and set out to eat my last meal in Thailand. I came back and had another bath and then I packed my bags and I checked out at 10am. I waited and waited and waited some more…at 11:30 still no sign of this guy, I thought to myself Oh not again, what a disaster!!!!

Then out of the blue like a ray of hope, I heard someone call out my room number. WOW!!!! YEAH...finally!!!!

I later discovered that the guy/driver was there at 11am, but he was looking out for a Chinese man???? (I'm sure you’re confused) So was I.

They had distorted my name I was now "Jeng Bong" far from James Barnett. :) :) So after a 4 hour ride, I arrived in Bangkok, everything was Bang this and Bang that :) :) :)

I stayed that the Hotel Unico Leela, nice hotel; however the corridors were only 3 feet wide. I clicked a few more snaps of my room, rearranged the mini bar and had baths :) :) :)

In the afternoon, I went to Starbucks and then I went back to my hotel. Bangkok is more commercialized and there were a lot of huge buildings and really busy streets.

I received a call from the main tour operator asking me for some documents, so I told them that they could collect them in the evening. At around 7pm they came, looking around, I noticed that they were looking for someone and I approached them and told them that I was James.

They told me that they thought I was British, as they had spoken to me over the phone and did not realize that I was an Indian.

Then I told him (tour operator) that I had not got the Coral Island tour, he apologized and said that he would make it up by giving me some other event (underwater world show) or something like that.

The next day I got a tour of the temples (Buddhist) I had a tour guide who spoke impeccable English, as per Chinese standards. We mostly communicated through sign language. I believe that the only English words she knew were “Look, See, there, here, wait, come, stay, I’ll be back and Thank you”

The Temple Tour was supposed to last 3hours, but everything looked alike so I managed to finish the entire tour in under 45mins.

There was this huge statue of Buddha made of 18k gold, it was awesome, and then there was an even bigger statue of the Reclining Buddha. I clicked some snaps there. This was the 1st place where you will see someone else click a snap of me as I was alone the other time. :)

Then I bought a cup of coins and made a wish and I had to drop 1 coin in each bowl. Since we had plenty of time to spare she took me to the Gems Gallery.

The Gems gallery was nice; they showed me how they polish the stones and cut the gems etc... Again it’s was “all see no buy”.

The tour of the Temples and Gems was done and my tour guide had no idea what to do, we had plenty of time and nowhere to go. I sensed that she was also bored so I told her I wanted to go back to my hotel

She was happy as she got to go home half day. I skipped the underwater tour as it I wanted to spend some time shopping. I went back to my hotel and this time, I had a Shower :) and I walked and walked to the nearest super mall.

I had not shaved in 4 days and people kept mistaking me for someone from the Middle East :) They were speaking to me in Arabic and kept giving me menus in Arabic :)

The street where I lived was surrounded by Eastern/European/Indian restaurants, really nice.

So I went to this Massive Shopping Complex, 9 levels, the 9th level was the food court, I ate there and then I went down to each level. I saw some really nice things, the electronics were really cheap 40% cheaper than in India, but since I was carrying only one bag and I did not want to check in any luggage as I did not want to wait at the airport when I got back (usually it take really long) and I headed back to the hotel.

I spent the evening tying to pack all that I had bought (really little) neatly, and then I went out to dinner and after a bath. I went to sleep.

The last day I had a quick breakfast, this time there were also fruits so I had that and I checked out of my room and waited for my pick up.

It was an experience for me, I am sure It could definitely be better if I had some company.

Again looking on the positive side, I did what I said I was going to do, I learnt some very important lessons and I got to see a new country. So no complaints :)

Looking back at what happened, it would not have been so exciting it everything was smooth :) :) :) That's what I keep telling myself :) :) :)
Posted by James Barnett at 20:13