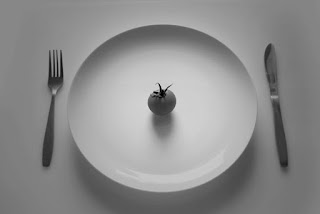 This post is not about touching a rare dinosaur in a museum, it’s a post about my food phobia as a child. If you have read my previous post ‘Old Man’ you would not be surprised as, I had certain oddities as a kid. There were specific rules I followed diligently during meal time, let's just call it my meal mantra.

I had my own plate with my name engraved on it and no one would dare touch that plate. I had a specific fork and spoon and the same rules applied. I had other rules which I have explained in details in the following posts Things I Eat and How and Gastronomical Idiosyncrasies.

The rule of 3 drops of gravy was short lived, and I became less fussy over the years, however between the ages of 4 – 7 I was an absolute pain. Let me set this up for you, if I was eating chicken, fries, rice and chicken gravy. Then rule no 1, stated that the fries and the chicken should not touch, if you find this confusing, don’t bother to read anymore.

I love fish and chicken, however I would not or could not get myself to eat them at the same time. (same meal)  I could not bear to see a piece of chicken and fish in the same plate. I am sure you are wide eyed right now, wondering what a weird kid I was. I had these rules for a reason, which was logical only to me.

My reasoning behind this odd condition was that, if the chicken touched the fish then the taste would get compromised. However if I ate them separately I would get to fully experience the flavors individually. It does sound like a plausible argument, well at least to me.

I was reading an article on the Internet and I realized that I was not the only weird person on the planet. This condition has a name and it's called brumotactillophobia, it’s a food-related phobia of food touching other food.

Over the years I have improved considerably and although I do not suffer from brumotactillophobia anymore, I still have a few quirks.

There are some rules I still follow till today, I don’t let anyone eat from my plate or sip from my glass, except my girl friend. It's not that I feel they are infested with some deadly bacteria, I just don't like it. What I do, is request them to get another glass or a plate.

During birthday's it is customary for the birthday boy or girl to cut a piece of cake and give all the close family members and friends a bite. I however I can't and won't participate in that act of sharing DNA. The only person on the planet who will be allowed to eat stuff from my plate or share my food will be my girlfriend.

So if you ever offer me a bite of your sandwich or cake, don’t be offended if I refuse.
Posted by James Barnett at 15:01